Manaslu fact and travel guide, Manaslu is the Eighth Highest Mountain in the world with 8,163 meters (26,781 ft.) height above sea level. It is situated in the Mansiri Himal, in the west-central part of Nepal. Manaslu means “Mountain of spirit” which derives from Sanskrit word Manasa meaning “Intellect”. Manaslu was first climbed on 9 May 1956 by Toshio Imanishi and Gyalzen Norbu as a member of Japanese Expedition so that Manaslu is also called as Japanese Mountain.

Manaslu is located on 64 km east of Annapurna in Gorkha District of Nepal. Manaslu region offers a variety of trekking options. In 1991 Nepal Government allowed trekking in this region. The trekking trail follows an ancient route along the Budhi Gandaki River. We can observe 10 peaks over 6500 meters height including few over 7000 meters. The highest point in Manaslu trekking route is Larkya La with an elevation of 5106 meters. Apart from climbing Manaslu Mountain, trekking is also familiar in this region as part of Manaslu Circuit.

The Manaslu Conservation Area established in 1998 under the National Parks and Wildlife Conservation Act. This area covers 1663 square kilometers (642 sq m) and managed by National Trust for Nature Conservation (NTNC).  The main theme of this region was “to conserve and sustain management of the resources and rich cultural heritage including the promotion of ecotourism”.

The Manaslu region is also called the Manaslu Conservation Area. It comprises sub-tropical Himalayan foothills to Trans-Himalayan high pastures bordering Tibet. From Arughat to Larkhe La Pass the area covers six climatic zones. There are many zones. The tropical zone varies from 1,000 to 2,000mtrs, temperate zone 2,000 to 3,000mtrs, sub-alpine zone 3,000 to 4,000mtrs, alpine zone 4,000 to 5,000 meters and arctic zone more than 4500mtrs.

In the view of glacial valleys, Manaslu offers several routes to mountaineers. Ngadi Chuli, Himalchuli, and Baudha peak surrounds Manaslu. Larkye Peak lies in the north of Manaslu with the elevation 5106mtrs. The peak is also surrounded by Ganesh Himal and Buri Gandaki River gorge at east, fissures of Marsyangdi Khola with Annapurna range hills at the west, Gorkha town at the south.

The permanent snow line is above 5,000mtrs elevation. Here the annual rainfall is about 1900 mm during monsoon time (June to September). In this area, the temperatures widely vary with the climatic zone.

Just like other regions these regions also have many highly endangered animals like snow leopards, Red Pandas. Also, other mammals include Lynx, Asian black bear, grey wolf, dhole, Assam macaque, Himalayan Musk deer, blue sheep Himalayan Thar, mainland serow, Himalayan goral, woolly hare, horseshoe bat, Himalayan mouse-hare and black-lipped pika. Here over 110 types of bird, 33 mammals, 11 butterflied and 3 reptiles found. In this area, the conservation of wildlife has been achieved by monks of monasteries and the ban of hunting in this place. This area is now the important habitat place for the snow leopard, grey wolf, musk deer, blue sheep, and the Himalayan Thar.

Mainly there are 3 types of vegetation have identified in this area. This vegetation can be  categorized into 3 categories as Low hill, Middle Mountain and High Mountain. Depending upon the microclimate and other aspects, an overlap of vegetation is noticed in adjacent areas. This region includes nineteen different types of forests including Rhododendron and Himalaya Blue Pine forest. It also has different vegetation. Overall, there are 19 types of forests and other dominant vegetation has recorded from the area. Also here are 1500 to 2000 plan species are growing.

The trekking route of Manaslu region passes through mountainous terrain prone to consequences of monsoon rainfall, landslide, and landfalls. 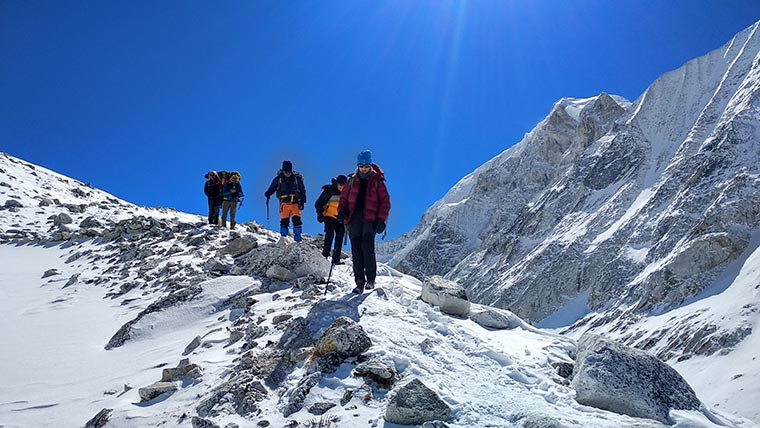 The following are the best trekking in the Manaslu Region:

Manaslu expedition is a complete climbing adventure of 8000-meter peak in Himalaya of Nepal. It offers the restricted trekking region of Manaslu which unfolds the diverse landscape and challenging climbing experience. For the Manaslu expedition, the climber needs to have excellent physical and mental preparations because it is technical and challenging than Cho Oyu and Sishapangma. There are two peaks in this region for climbing.

Who will enjoy the Manaslu trek most?

Probably most of the people enjoy the trek but mainly those people, who are interested in culture, tradition, want to go away from the crowds and commercialization will enjoy this trek.

What permits do I need for Manaslu Trek?

And the trek must be through a registered trekking agent.

Who is your guide and is he trained?

Can I trek the Manaslu Trek Independently/alone?

You must trek as a group of at least two and accompanied by a registered guide. You can also buy a “Ghost Trekker” permit and then go along with guide. For this, you need a real passport and a real person.

Some of the trails are airy, high above the Budi Gandaki River, the trails but the trails are perfect for trekking. There are too many ups and downs but nothing is too extreme on this trek.

Which is the best season for Manaslu Trek??

Sep to Nov is the best season for this trek.

Annapurna circuit trek is busier than Manaslu Circuit Trek when you visit in the month of October but most of the other months are quiet.

Can I do the Manaslu Circuit trek in reverse?

Yes. But be aware of proper acclimatization. It is the fastest way. So, the people of Samdo and the lodge owners in Larkya Phedi come this way from Pokhara and Kathmandu.

But you are not acclimatized it is good to come via Budi Gandaki valley otherwise you have several days acclimatizing in Bimtang.

How much for the trip cost?

The amount of Cost is depending on trekkers because we organize the Budget trip, Standard trip, and deluxe trip. We offer the best trip you prefer.

Around Manaslu Trek – Recommended Side Trips