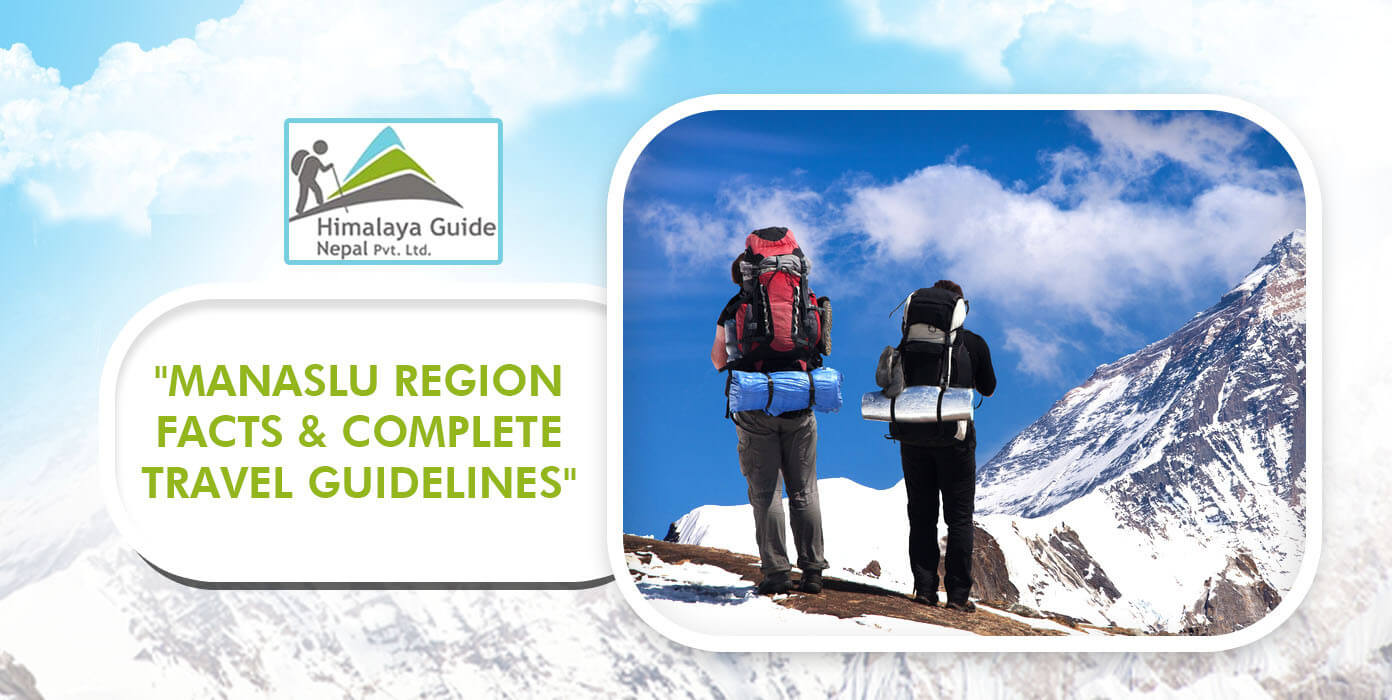 Before you commit to setting foot on the Manaslu circuit or an expedition to the summit itself, we recommend you go through this informative article about Manaslu Facts and Travel guide we have put together. Prior knowledge of the journey you are about to embark on is essential, as this can surprisingly help you in ways unbeknownst.

Preparation is key to your Manaslu trek because trekking/climbing in this region is no joke. The Manaslu Facts and Travel Guide is designed to inform you about everything that you need to know about this trip.

This is the Eighth Highest Mountain in the world, and it stands at an altitude of 8,163 meters (26,781 ft.) above sea level. It is situated in the Mansiri Himal, in the west-central part of Nepal. Manaslu means “Mountain of spirit,” and it derives its name from the Sanskrit word Manasa meaning “Intellect.”

Manaslu was first climbed on the 9th of May 1956 by Toshio Imanishi and Gyalzen Norbu as a member of the Japanese Expedition. Hence, Manaslu is also called the Japanese Mountain.

Manaslu is located 64 km east of Annapurna in the Gorkha District of Nepal. The region offers a lot of trekking options. In 1991, the Government of Nepal began permitting treks in this region, as it was a completely restricted area prior to that. This trail is on an ancient trekking route beside the Budhi Gandaki River.

We can observe 10 peaks over 6500 meters in height, including a few over 7000 meters. The highest point in the Manaslu trekking route is the Larkya La pass with an elevation of 5106 meters. Apart from climbing the Manaslu Mountain, trekking is also familiar in this region as part of the Manaslu Circuit.

The Manaslu Conservation Area was established in 1998 under the National Parks and Wildlife Conservation Act. This area covers 1663 square kilometers (642 sq m) and is managed by National Trust for Nature Conservation (NTNC). The central theme of this region was— “to conserve and sustain management of the resources and rich cultural heritage, including the promotion of ecotourism.”

With views overlooking the glacial valleys, Manaslu offers several routes to mountaineers. Manaslu is surrounded by the Ngadi Chuli, Himalchuli, and Baudha peaks. Larkya Peak lies north of Manaslu, with an elevation of 5106mtrs.

The peak is also surrounded by Ganesh Himal and Buri Gandaki River gorge in the east, fissures of Marsyangdi Khola with Annapurna range hills at the west, and the Gorkha town southwards.

The permanent snow line of this region is above 5,000mtrs. Here, the annual rainfall is about 1900mm during the monsoon time (June to September). In this area, the temperatures vary widely with the climatic zone.

Mainly, three types of vegetation are identified in this area. This vegetation can be categorized into Low hills, Middle mountains, and High mountains. Depending upon the microclimate and other aspects, an overlap of vegetation is noticed in adjacent areas. This region includes nineteen different types of forests, including Rhododendron and Himalaya Blue Pine. There are 19 types of forests, and other dominant vegetation has been recorded from the area. There are 1500 to 2000 species of plants growing here.

The trekking route of the Manaslu region passes through mountainous terrain prone to natural calamities of monsoon rainfall, like landslides and landfalls.

The following are the best trekking in the Manaslu Region:

The Manaslu expedition is a complete climbing adventure of an 8000-meter peak in the Himalayas of Nepal. It offers access to the restricted trekking region of Manaslu, which unfolds the diverse landscape and challenging climbing experience. For the Manaslu expedition, the climber needs to have excellent physical and mental preparations because it is more technical and challenging than the Cho Oyu and Sishapangma.

It is regarded as the “4th most dangerous peak”, and climbing the Manaslu Peak requires favorable weather conditions and strength of character. The ideal time to test yourself on this expedition is during the spring season.

There are two peaks in this region for climbing.